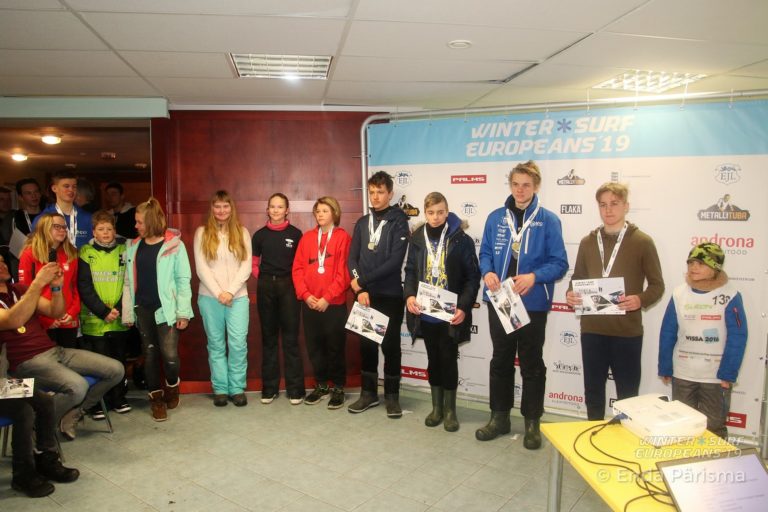 Some of U17 participants

European Winter Surfing Championships was 3 days of competition on the ice. There were both ice and wind, giving full racing days both for kites and sleds.

Organizing that kind of event there is always a risk of having no wind. You can never predict it and while events last 5-6 days you can be sure there is the wind at some days but the risk of having no wind increases with fewer days. For winter surfing the other thing needed is ice and luckily we had it, too, at least 30cm at the racing area.

Of course, the conditions were not perfect: there could have been more snow for kiters, the ice could have been smoother for sleds, the one big crack caused some problems (although the ice was thick there still is this One Bad Crack somewhere), Sunday was maybe a bit too wet.. But overall, hey, as said, we had wind and ice and races every day! We all know that kind of event cannot go without problems so we faced some, too. We are very happy we got such an amount of participants but as almost half of them were not preregistered it caused some delays on Friday. The race committee had to redo some prepared stuff and so on, it just took some time. Hey, we are really happy you all came, no worries! Also, we were not prepared to have 53 sleds on course race – of course it caused some problem at first races. But it was wonderful to have such a big fleet!
However, there was some broken equipment, some accidents and disappointment, some decisions not liked by everyone. Even the ambulance had to find its way to us but luckily left without taking any participants to the hospital.

It was good to see winter surfing is not a “dying” sports – there were so many youngsters taking part! U17 was a big fleet, both in kites and sleds. Meaning – winter surfing has a bright future with so many new racers coming along. In the end, hopefully, we all learned something new. Who just found something to improve, who improved during those days already a lot..

Today, the champions were announced and prizes were given.