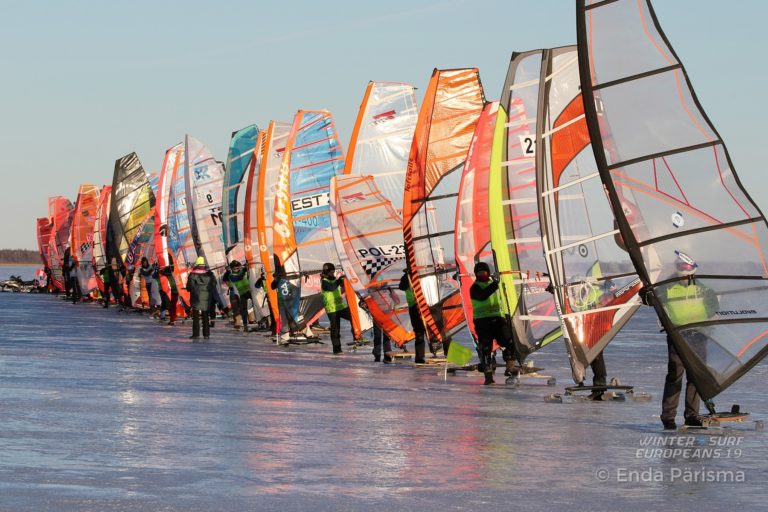 Winter Surfing Europeans 2019 has had two good racing days. Luckily there has been the wind at both days.

Although there were just over 30 preregistered participants there were many people registering on the site and the total number of racers is 64, of what 11 are in kite class and in 53 sled class. For years there has not been such a big amount of sleds in any competition.

As there was a big amount of new registers, some of them coming pretty late, the races began around an hour later on Friday as the race committee had additional work due to it. Also, it caused some delay at sleds course race starts – it’s not easy to line up 53 participants. However, the process was already quicker on Saturday.

For kites, it has been two days of course racing, five races both day. Leaders are from Russia, Andrei Balyakin being the best. Sled course races had very different days. On Friday, in the lower wind conditions, the Polish did good results in the two races of the day. However, on Saturday, with some snow and higher winds the Latvians rule at both races and after two days the leader is Janis Preiss. Best woman is Marianne Rautelin from Finland. Best U20 youth is Jedrzej Cituk and best U17 junior Maciej Pietrzak, both from Poland.

At the sled slalom discipline, there was a qualification round and one race on Friday, continuing with three races on Saturday. As there is such a big amount of racers the rounds take more time than usual. At the top there are Latvians, Lithuanians and Estonians, Janis Preiss leading the race at moment. The same, as slalom – and also the leading woman is the same as in the slalom, Marianne Rautelin. At the U20 youth class, the leader is Ugnius Alekna from Lithuania and in U17 class Joonas Väär from Estonia. The fastest is so far Raigo Kiho with 78km/h, run with kite.

Sunday will be the last day of the Europeans.